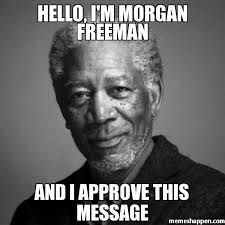 Now, if you’re like me, aside from the volume and vindictiveness of the negative ads, the most annoying aspect of these ads are the disclaimer line from the candidate, “I’m [insert name here] and I approve this message.”  Sure they may get a little creative and add an additional line, usually adding on “…because I’m [for/against] [insert issue here].”

What you may not know is WHY those disclaimers are there.  The main reason is differentiate ads funded by the campaign, from those that are funded by outside groups.  Campaign finance is a whole other rabbit hole we can go down, but generally speaking, candidates are confined by donation limits to their campaign on what they spend money on, while outside groups (typically called “soft money”) can spend whatever they want.  Things were getting pretty out of hand when John McCain and Russ Feingold put together the  Bipartisan Campaign Reform Act (BCRA).  Now, much of it has been overturned as unconstitutional (*sarcasm* thank you Citizens United) but one key provision still enacted is the “Stand By Your Ad” provisions. Those provisions require:

(I) shall be conveyed by–
(I) an unobscured, full-screen view of the candidate making the statement, or
(II) the candidate in voice-over, accompanied by a clearly identifiable photographic or similar image of the candidate; and
(II) shall also appear in writing at the end of the communication in a clearly readable manner with a reasonable degree of color contrast between the background and the printed statement, for a period of at least 4 seconds.”

The goal of the provision was to tie a candidate to their campaign’s ads, thereby hopefully improving the tone.  In practice though, things remained pretty bad as people found more creative ways to circumvent the provision.  Sure, the positive ads candidates almost always make the statements themselves, staring into the camera, making some bold statement about fighting for constituents.  The negative ads, well, there are a number of ways those go.

For starters, most negative ads are still provide by PAC “Soft money.”  The rules say they can’t coordinate ads with the campaign, but it’s unlikely a campaign is going to be upset about them beating up their opponent for them.  In addition, because of Citizens United (we don’t like this decision, in case you can’t tell), there are no limits to the spending on such ads.

Another way they get around it, sort of, is by the second line of the provision.  You only need a brief picture of the candidate in voice-over.  So they usually START commercials with a still pic and the voice statement, and then play a completely separate 26 second commercial, detached from the statement.  The effect is to leave the voter at the end with the negative feelings brought on by the commercial, and you certainly don’t want a cheery picture of your candidate at the end.  Instead, you would usually leave a still picture, often black and white, with a slow zoom in or out, of the opponent candidate, usually looking angry, or befuddled or lowly in some way.

So as you slowly settle into autumn and begin to consume ungodly amounts of negative campaign commercials, pay attention to how these are constructed and understand why.  And if you see a commercial start with the message approval disclaimer, change the channel.  Or watch Netflix. Or DVR and fast forward.  Or best yet don’t watch TV at all.