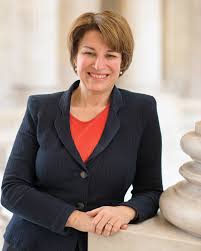 This is the fourth in our series of early analysis of the candidates vying for the Democratic Presidential Nomination.  We will try and provide 1-4 of these a week covering all of the candidates until they all have a page, and update some items periodically.

Upon graduating law school, Klobuchar worked for local Minneapolis firms.  Her first foray into politics came after she gave birth and was forced to leave the hospital 24 hours later, a situation exacerbated by the fact that Klobuchar’s daughter, Abigail,was born with a condition whereby she could not swallow. That experience led Klobuchar to appear before the Minnesota State Legislature advocating for a bill that would guarantee new mothers a 48-hour hospital stay. Minnesota passed the bill and President Clinton later made the policy federal law.  Soon after, Klobuchar ran for Hennepin County District Attorney and won.  In 2006, after Senator Mark Dayton decided not to run for Senate, Amy Klobuchar took up the DFL (in Minnesota, the Democratic Party is the “Democrat-Farmer-Labor” party) nomination and easily won election.  Since then, she’s been one of the most popular members of the Senate, working with both parties to regularly pass bi-partisan legislation.  She has made a name for herself in being a very practical politician.

Path to the Nomination

Unlike many of the other candidates running for the nomination aiming for the liberal activist base, Klobuchar is working to appeal to the more moderate and practical members.  This should work well in the industrial midwest and those states that Democrats lost to Trump in 2016.  She needs to do well in Iowa (a neighboring state) and is positioning herself to do just that.  There is just one big obstacle in her way:  Joe Biden.  The voters she is appealing to are the same voters that like Biden big time, and while she can make inroads with those voters, it will be hard for her to win without Joe faltering a bit.

In addition, she has a huge potential as the Veep candidate.  Most national party members like her very much, she’s an excellent campaigner and fundraiser, and she can focus on those Great Lakes states while the candidate campaigns more broadly across the country; no other candidate can say that.

After her initial entry into the race (that photogenic snow-globe speech was fantastic), her numbers have dropped a bit.  Questions have arisen on how she has treated staff members in the past, but many past staff members have come out in support of her as well.  Now that Joe Biden has entered the race, she seems to be in low-mid single digits.  We have her within our third tier with Beto O’Rourke and Cory Booker, as a solid candidate who needs some outside help to move up, but clearly with a chance to win.

Klobuchar has potential to move up and play a major role in this race, either as the candidate or as the #2.  Keep an eye on her and how she does in the debates.  If Biden loses steam, Amy can make a huge jump up to the top tier.  Definitely worth paying attention to.